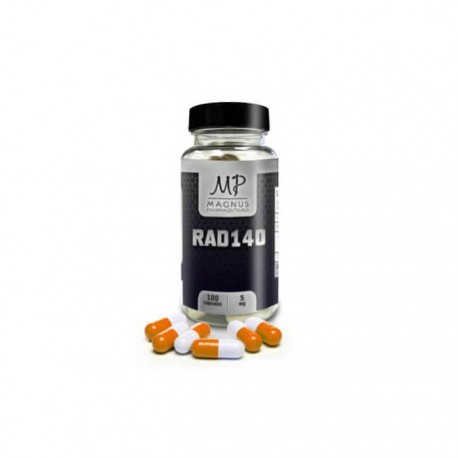 Magnus Pharmaceuticals RAD140 is an oral SARMS SARMs (selective androgen receptor modulator) with an extremely strong anabolic effect and also preventative mechanisms of action. The anabolic effect of RAD140 Magnus Pharmaceuticals SARMS is Considered to be stronger than that of DHT, dihydrotestosterone ie. In addition, RAD140 can increase the anabolic effect while simultaneously delivering testosterone and at the same time reduce the androgenic side effects of testosterone, Such as prostate enlargement, reduction of testicles, acne, oily skin, and swelling of breast tissue.

The preventative mode of action of RAD140 Magnus Pharmaceuticals SARMS is, for example, the reduction of the general occurrence of cell death in neurons under stress cellular exposure, Which also makes this interesting SARM for the prevention of neurodegenerative diseases.

One should cautiously assume that the suppression of the body's testosterone production might be more severe or could be used more quickly than, for example, with LGD-4033rd For safety, you should dose directly during the cycle Tamoxifen and definitely Zinc in the range 150mg. Other side effects of RAD140 Magnus Pharmaceuticals SARMS are not known at the moment, but since SARM is a very tissue-selective compound that binds almost exclusively to the androgen receptors in the skeletal muscle tissue, no drastic side effects are to be expected.